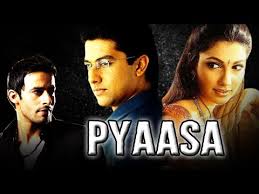 Pyaasa is a 1957 Indian film, producer and directer by Guru Dutt, writter by Abrar Alvi, and starring Guru Dutt, Waheeda Rehman and Mala Sinha. Set in Calcutta, West Bengal, the film tells the story of Vijay, a struggling poet trying to make his works known in post-independence India, and Gulabo, a prostitute with a heart of gold, who helps him to try and get his poems published.The music was composed by S.D. Burman. 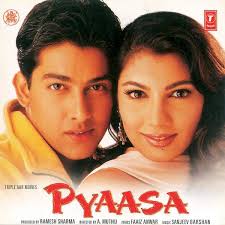