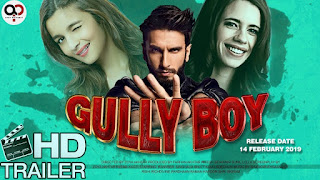 Gully Boy is an upcoming 2019 Indian Bollywood musical drama film directer by Zoya Akhtar. It stars Ranveer Singh and Alia Bhatt in the lead roles. It is being co-produced by Akhtar's Tiger Baby and Excel Entertainment productions. The film is based on the lives of Vivian Fernandes aka Divine and Naved Shaikh aka Naezy known for their song "Mere Gully Mein" in Mumbai.Principal photography on the film began in January 2018and wrapped up in April 2018. It is confirmed for release on 14 February 2019.