Luka Chuppi is an upcoming Indian Hindi-language romantic comedy film directer by Laxman Utekar. It stars Kartik Aaryan and Kriti Sanon in lead roles and tells the story of a television reporter in Mathura who falls in love with a headstrong woman.Principal photography for the film began in Gwalior in August 2018 and was completed in Mathura in September 2018. The film is scheduled for release in March 2019. 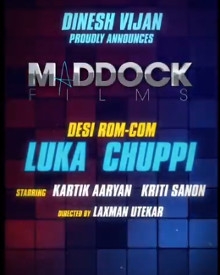