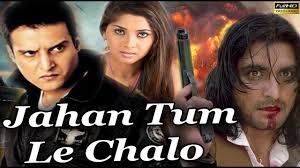 Jahan Tum Le Chalo was a 1999 Indian Bollywood film directer Desh Deepak. The film is a romantic one with music by Vishal Bhardwaj and lyrics by Gulzar. This film is the first production of Rishi Films International a venture of Holland-based Dr. Anil K. Mehta. The Plot of the film is inspired by a real happening in Dr.Anil K. Mehta's friend circle in Europe. The film is based on French novel Aimez-vous Brahms? by Françoise Sagan. The novel was previously made into a film called Goodbye Again 1961 film starring Ingrid Bergman and Anthony Perkins.