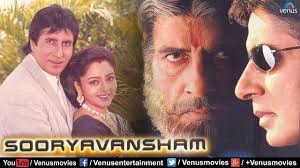 Sooryavansham is a 1999 Bollywood musical melodrama film starring Amitabh Bachchan in a dual role, Jayasudha, Soundarya, Rachana Banerjee, Anupam Kher and Kader Khan. The film marked the Bollywood debut of Telugu director E. V. V. Satyanarayana and remained his first and only directorial in Hindi. It is also the only Hindi film that the late actress Soundarya acted in. Although the film was a big flop at the box office, critics hailed Amitabh Bachchan's performance as one of his best since his comeback after a hiatus in 1997. Also it attained a strong cult status and was telecasted many times on the television channel - Set Max.